How to write the character analysis essay and improve your grades?

First things first, we have to start with the bad news. To create a really good character analysis, it will not be enough to browse the summary of the book, you have to read the text and, possibly, get to the bottom of it. Try to imagine the character, how does he or she look like, what is the character`s background, motives, and outlooks. Only in this case, you will create a really good and balanced analysis.

Another vital reason to read the whole book is to be able to defend your point of view in from of the audience including the teacher. We are all different, we can all have different ideas about one single book. People even tend to have billions of different opinions about Shakespeare`s «Romeo and Juliet», even though it is the world classics and the most famous love story of all time.

It may not always be exactly the most interesting part of the process, but still, make an effort and read the whole book. The total win-win strategy, in this case, will be reading the whole book by making notes on the character you are about to analyze.

The character analyses are the understanding of the literary character from one or more perspective based on his or her background mentioned in the book. The main goal of this kind of analysis is to create the character`s detailed and relevant profile.

How to do a character analysis?

As we have already mentioned, the first step to make towards a good character analysis is reading the book. It may be boring, on occasion, yet it is necessary.

Secondly, choose your character. Who speaks to in the book, who do you understand best? Here you have to think carefully so that it would be easier for you later to analyze your character.

As the next step try to read again or at least to rethink the whole story from your characters point of view. Try to understand the way he sees the story. Why does he have this particular kind of interaction with the characters of the book, how does he react to everything that is going on around him?

Think carefully about what you have observed about the character. What can it tell you? Remember, those characters are usually created by the authors to deliver a certain massage. Try to decode this message and give your version of what could be the purpose of creating this character. To understand better how to do it, you can read some character analysis essay sample.

What are the types of characters?

The correct delivery of character analysis requires the usage of certain terminology. Most importantly, you have to be accurate with identifying the type of character.

Now when you have already decided about the character you are about to analyze. Try to imagine him or her in flesh and blood. How do they look like? What kind of personality is it? What do you know about your character`s background, what impact did it have on him or her? What does he have to do with the story we find him in? What is his motivation? Try to outline your character. It also works well if you draw your character to help your imagination. You can also check out the character analysis essay examples.

What is also important to observe for the balanced analysis, is the language your character uses. You might have noticed from the real-life experience, that some people that use lots of I, my, me, etc. can often be self-centered and those who use lots of positive adjectives like wonderful, awesome, exciting are often easy-going people with a positive attitude.

What role does the character play?

As we have already said, it is always important to remember, that in any fiction writing the characters are integrated into the story with a certain intention. For example, in «Les Miserables» by Victor Hugo, there was a character, named Enjolras, who was brilliantly played by Aron Tveit in Tom Hooper`s Oscar winning screen adaptation in 2012. This character became the reflection of Hugo`s own ideas about freedom, revolution, and democracy.

This has to be your personal answer to the question, why this character does what he does? Try to understand the reason for his actions no matter whether they are good or bad.

Here, we can take a look at Shakespeare`s «Richard III». In this play, a protagonist is an evil man, who murdered his own nephews to take their crown and violated his young niece. But why did he do it?

Richard was the youngest brother of King Edward. For his whole life, he was treated without any respect as he was severely crippled, no one took him seriously because of his disabilities, women had no interest in him. But when his brother died, he suddenly got a chance to become the king himself and make everyone, who used to laugh at him to show respect and admiration.

Another necessary thing to mention in this kind of writing is the progress your character has accomplished throughout the book. As we know, every book is a journey not only for the readers but also for the characters. In most of the cases the characters, especially if you are observing the protagonist, make their way during the book. Sometimes they change in a good way, — in a bad way. 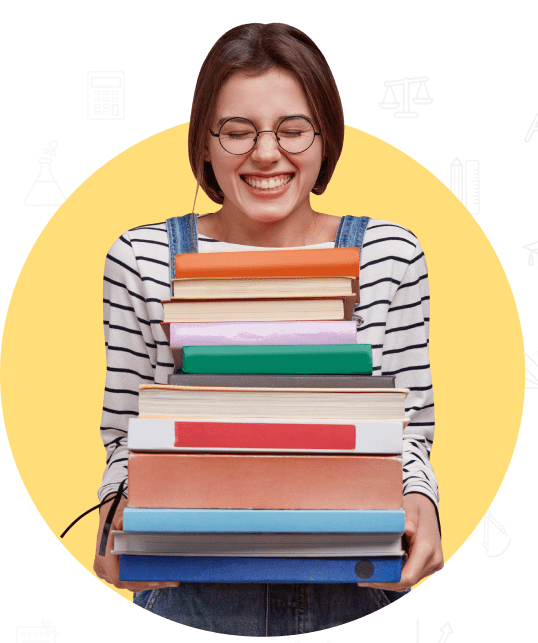 Don't have time to finish?
Try to write an academic paper with us

Your savings -$50 pick up gifts

Let us go back to the outline and take a more detailed look at the issue. For your own convenience, divide it into 3 parts (introduction, body paragraph, and conclusion). It does not mean that your character analysis essay should contain only 3 paragraphs. Every paragraph is an idea or an argument that you deliver, so the amount of them is totally up to you. Just remember about word limit, which is somewhere around a thousand words.

This is where you give an explanation, why did you choose to analyze this particular character. What is so special about him or her, that you think it may be interesting to make a research.

Here you deliver the results of your research, your opinion about the character, and the arguments that formed your mind. For example, if we analyze «Romeo and Juliet`s» Mercutio, we can say, that he is a complex character with a lot of pride. He felt very protective of his family, the people he loved. The most important thing for him is their safety and honor. This was the reason for what he did.

As in every type of essay, the character analysis essay has to be finished with a short summary of the thoughts we delivered. Usually, it consists of 2-4 sentences, where you describe the good and bad sides of the character, his motivation and the role in the story.

How to write a character analysis: 5 helpful tips and tricks

To summarize, here are 5 tips to create a perfect character analyses essay:

Now that you have got the theoretical knowledge on how to write a character analysis essay, it can also be useful to search for some examples. You can find them in any critical materials about any book. Just try to find the book that you really are familiar with, so that you could read the analysis critically.

We hope that this character was useful for you and you don`t regret spending time to read to. You can also read more articles on assignmentpay.com. 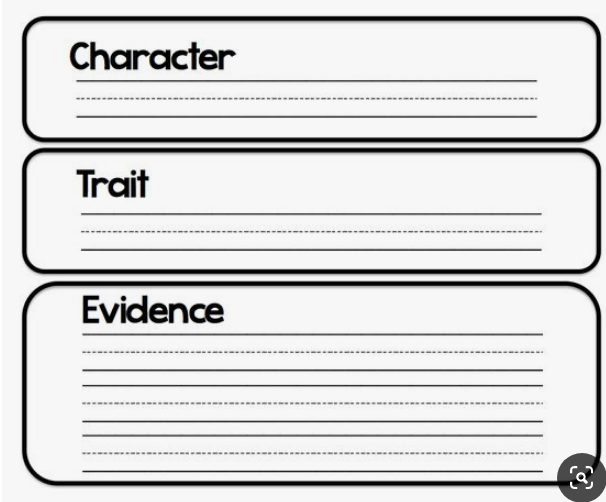 This is only a sample. To get an original paper click here ORDER View
Character Analysis Template 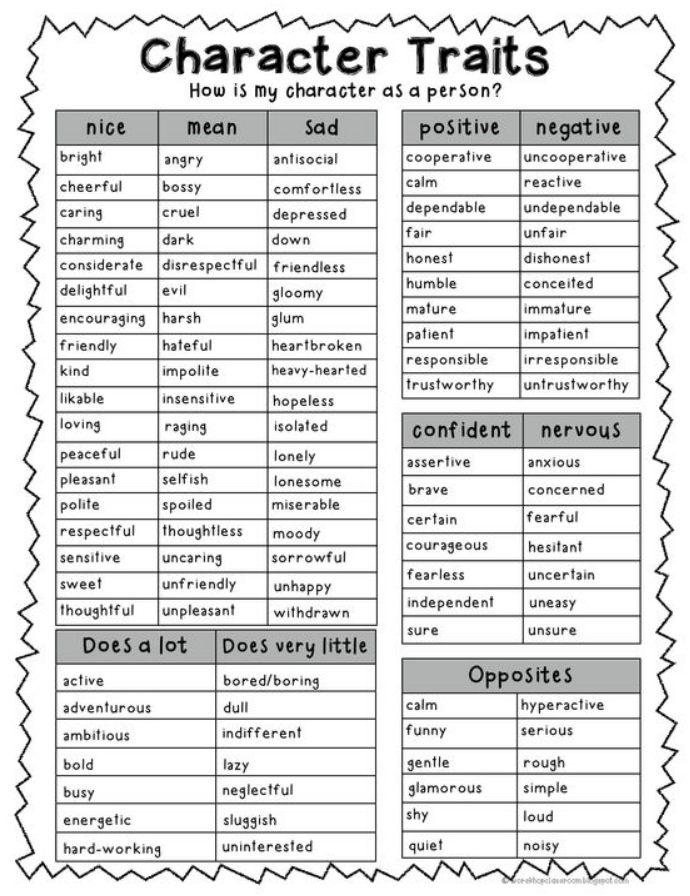 This is only a sample. To get an original paper click here ORDER View
Character Traits For Analysis Essay 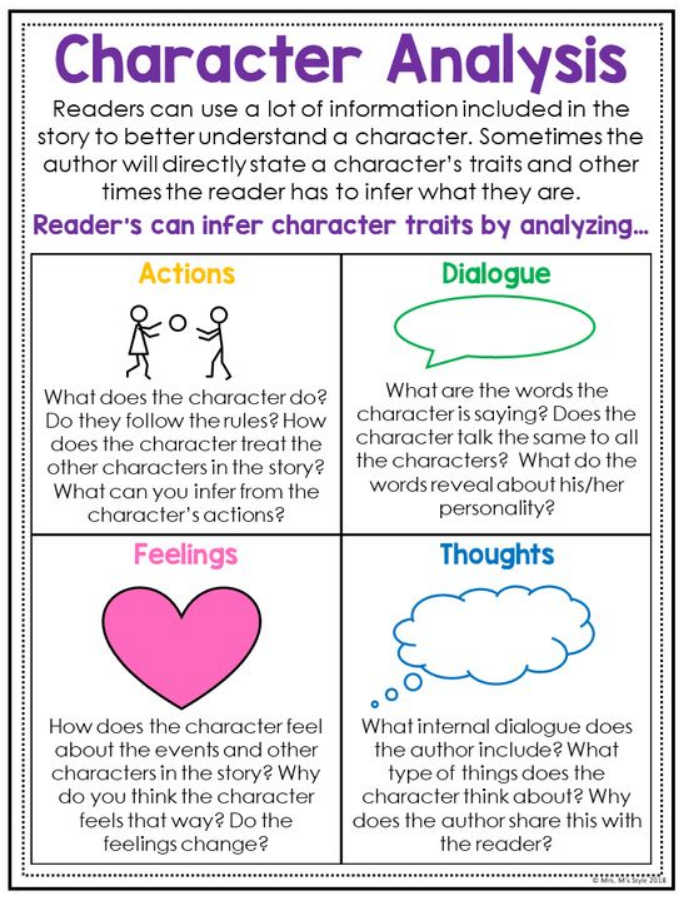 This is only a sample. To get an original paper click here ORDER View
Character Analysis Tips 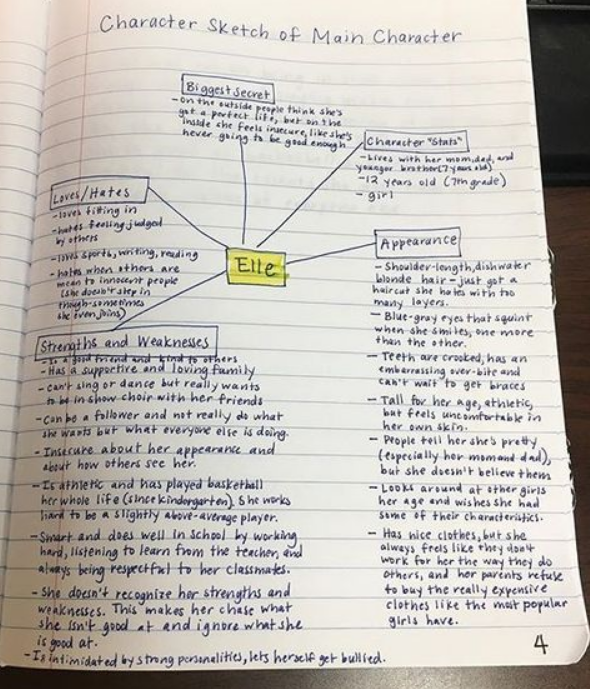 This is only a sample. To get an original paper click here ORDER View
Example Of Character Sketch 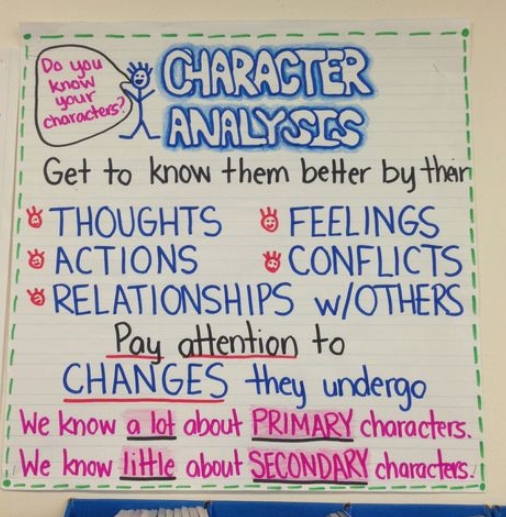 This is only a sample. To get an original paper click here ORDER View
How To Write A Character Analysis 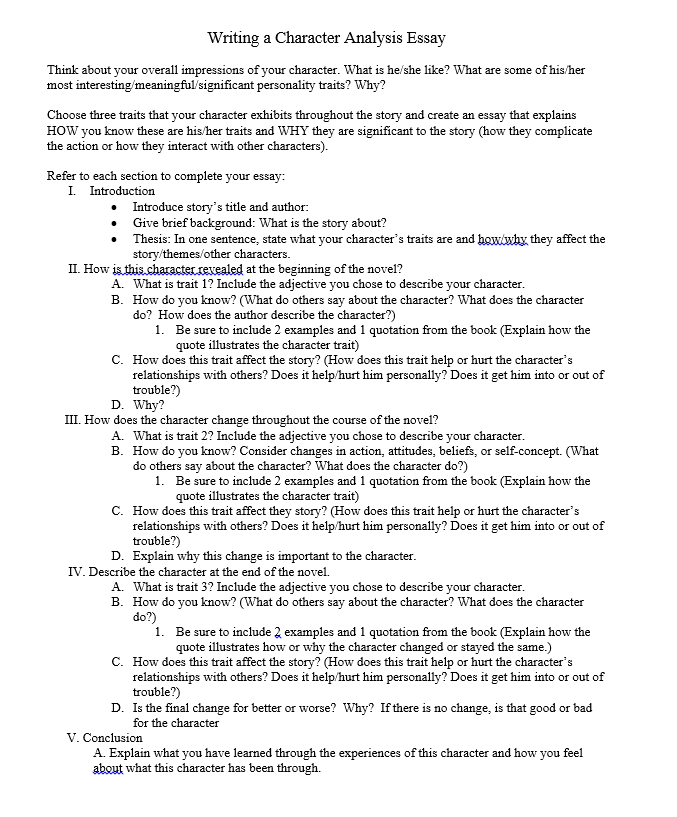 This is only a sample. To get an original paper click here ORDER View
Character Analysis Essay Outline 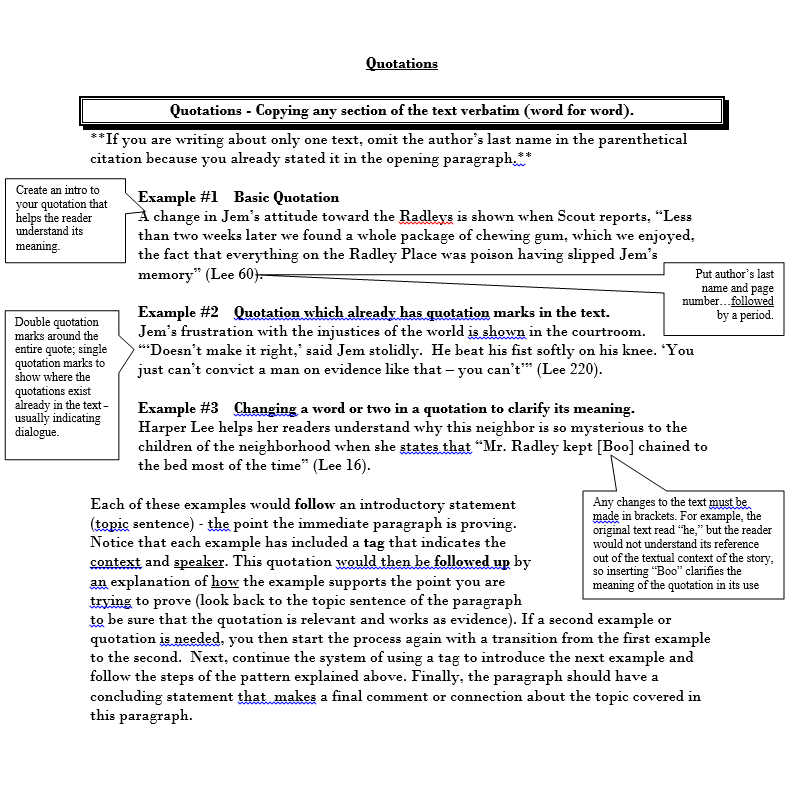 This is only a sample. To get an original paper click here ORDER View
Quotations Examples 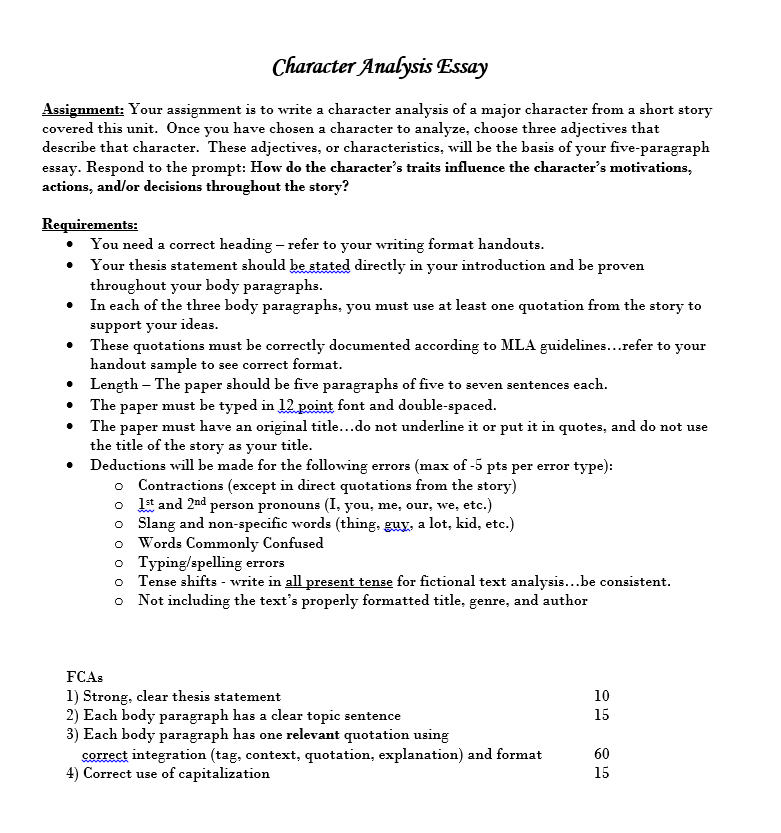 This is only a sample. To get an original paper click here ORDER View
Character Analysis Essay Requirements 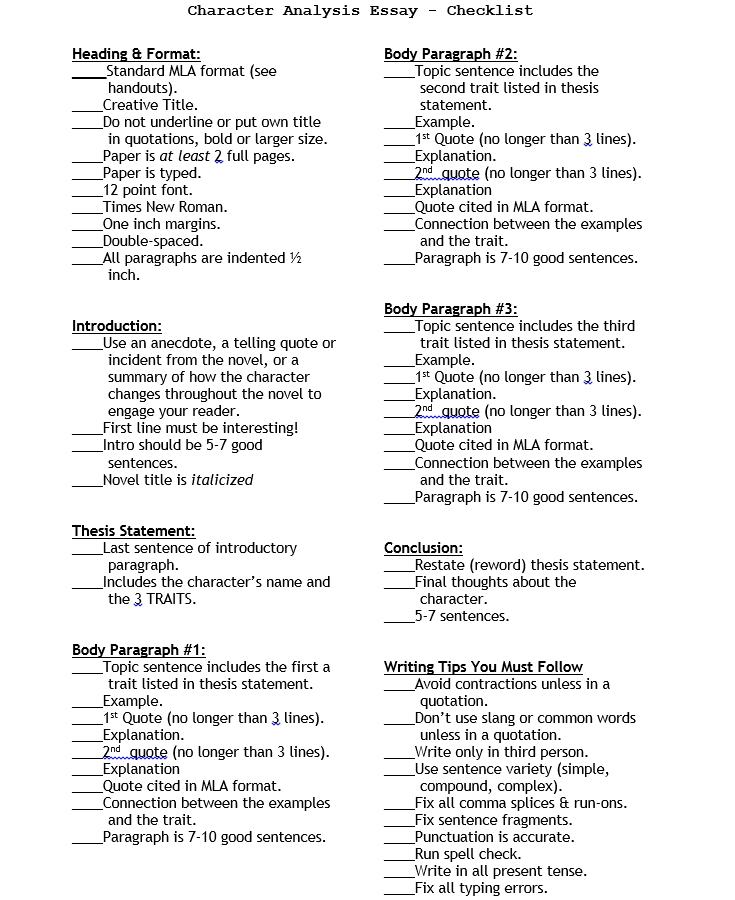 This is only a sample. To get an original paper click here ORDER View
Character Analysis Essay Checklist
Swipe left/right to view more examples!

Priscilla has an M.D. in the sociology of Duke University and a Ph.D. in Agricultural and Human Sciences of North Carolina University. Priscilla has been writing essays and other papers for students for 5 years and is interested in applied ecology and entomology. If you need a top-notch paper in sociology, ecology, agriculture, or entomology, Priscilla is ready to face any challenges you can offer.

Hire writer
Recommended for You
Types of Essays
22 Oct 2019 Read more
How to Write a Reaction Paper
07 Jan 2020 Read more
What You Need to Know About ACS Citation with Examples
10 May 2020 Read more
Send your e-mail and get a discount on your first order! 7%

Follow us and get a discount on your order